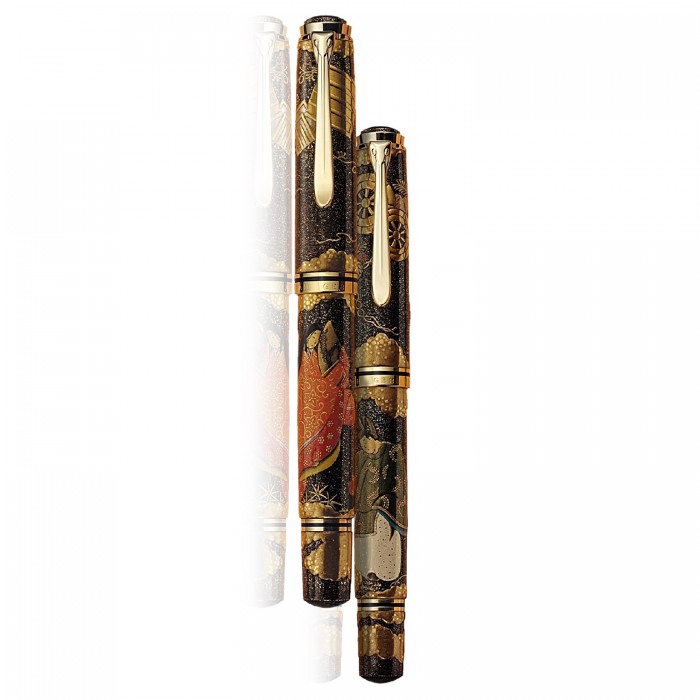 The Pelikan Maki-e Genji Fountain Pen Set was released in 2002 and is the made up of the first fountain pens in the series of Pelikan's limited edition maki-e pens.

It is an extraordinary limited edition of only 60 numbered sets world wide.

The set listed here is new from our stock and in pristine condition.

This distinctive and unique fountain pen was crafted and drawn using the Kaga-Togidashi-Taka-Maki-e technique.

The Tale of Genji is Japan's oldest novel, written over 1000 years ago.

Pelikan "Genji" is a set of two fountain pens portraying "Hikaru Genji" and "Aoi no Ue", each vividly expressed with Urushi lacquer and decorated with gold and silver powder enhanced with gold foils and grains on Nashiji background.

The hero of the ancient tale, Hikaru Genji together with Genji-gumo (clouds) are drawn on the barrel accompanied by Genji-guruma (wheels) and Aoi (hollyhock) on the cap.

The primary wife of Hikaru Genji, Aoi no Ue and Genji-gumo (clouds) are on the barrel of the second pen, while Genji-koh (incense) and Kazura-gusa (vine) can be found on its cap.

The Pelikan Genji pens are masterpieces that combine the craftsmanship of Pelikan Germany based on over 160 years of tradition and technology coupled with superior Japanese traditional Maki-e painting techniques.

The Pelikan Genji is limited to 60 numbered sets worldwide. Each fountain pen is equipped with an 18 carat, two-tone gold nib and is encased in a traditional Japanese pen box made of paulownia wood.