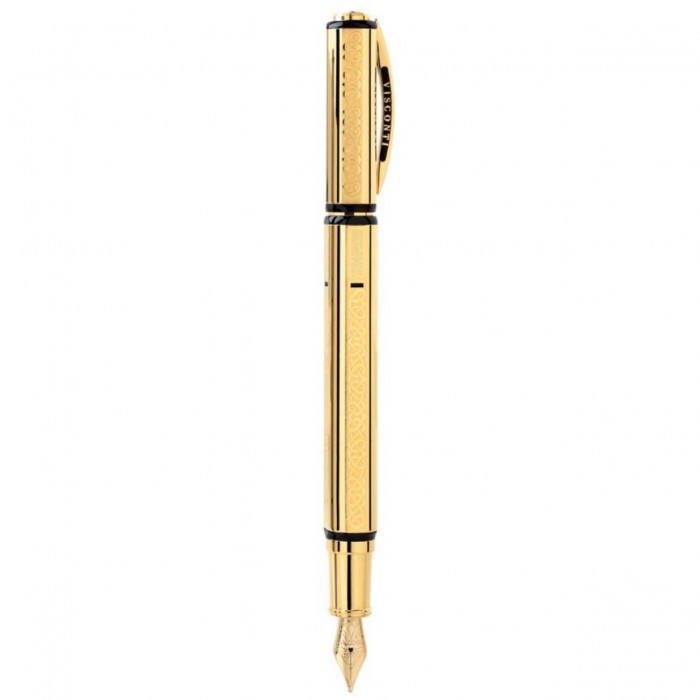 A unique limited edition fountain pen by Visconti made of 18kt solid gold, in a series of only 188 numbered fountain pens.

The Metropolis Gordian Knot is a safety fountain pen that was released in 2007.

The fountain pen features the slim and long four-sided metallic barrel and cap design on which the standard Visconti Metropolis Editions were also developed. However, the premium Gordian Knot Solid Gold Edition has an elegant gordian knot style engraving running along the four sides of the pen. All metal parts are in solid 18kt gold.

A retractable 18kt gold nib was selected for this edition, which also features an integrated piston filling system.

The filling system has a release button on the back end of the pen which the user must depress prior to operating the piston.

The Metropolis series was inspired by the themes of the first moving picture to ever represent a science fiction oriented future. Visconti's Metropolis is a fountain pen that carries the tradition of early 20th century futurism.

Lean and long the form of the Metropolis collection is stripped down to the very essentials.

A precious square barrel with rounded edges formas the barrel. A cap that is perfectly continuous to the barrel, and screws perfectly onto the pen's back side. A very minimalistic clip, a practical nib that withdraws safely into the barrel. An overall form that points to an ever-rising skyscrapper.

This is truly a pen that has come from the future as imagined in the early 20th century.