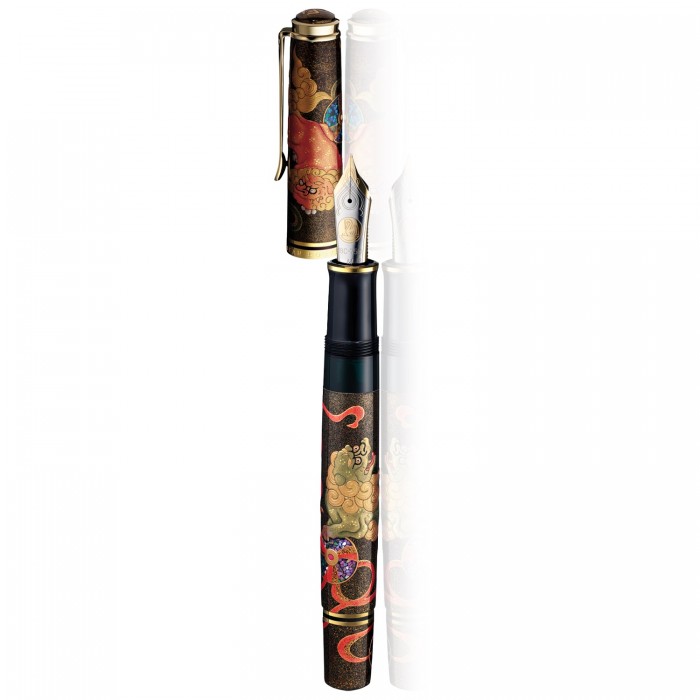 This distinctive and unique fountain pen was crafted and drawn using the Kaga-Togidashi-Taka-Maki-e technique that combines Taka-maki-e and Togidashi-maki-e.

Tigers used to be regarded as the king of beasts in ancient China, but when rumors about lions were passed on to Chinese people through the Silk Road, lions took the place of tigers. Lions were also valued as the symbol of kingship in China as in Egypt and India, where lion statues were placed in palaces of their dynasties to represent the king's power and to protect him.

Karajishi is an imaginary lion introduced from the Tang Dynasty (7th to 10th century) to Japan.

In both the East and West, lions have been considered a precious, luck-bringing animal that averts evil, beckons happiness, and promotes joy.

The two lions and six colored balls in Karajishi maki-e of the pen are believed to realize your dreams and bring joy and more fortune to you.

The "Karajishi" is a masterpiece created under the theme of Eastern culture with eternal history. The work combines the craftsmanship of Pelikan Germany with 170 years of tradition and technology, coupled with superior Japanese traditional Maki-e painting techniques.

The Limited Edition “Karajishi” was made available in 88 numbered pieces worldwide. Each fountain pen is equipped with an 18 carat, two-tone gold nib and is encased in a traditional Japanese pen box made of paulownia wood.