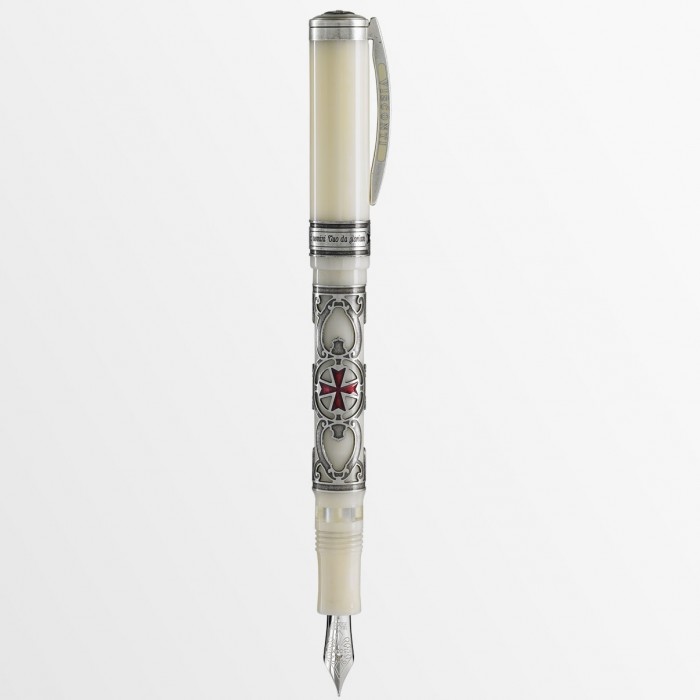 The Visconti Knights Templar is a limited edition fountain pen released in 2009 in 312 numbered fountain pens.

The main material is ivory-color resin, decorated with a detailed filigree design made of aged silver. Vibrant red enamel is used to emphasize the cross, symbol of the Knights Templar.

The fountain pen comes with Visconti's Dreamtouch nib, made of 23kt Palladium, has a double reservoir power filler system, and a screw cap.

It is offered in an luxurious gift box designed by Visconti exclusively for this edition.

This edition is dedicated to the Order of the Knights Templar, an order of Knights that approximately 7 centuries ago was charged with heresy, was outlawed, and had its members hunted down and killed, their fortunes confiscated.

The Order of the Knights Templar was found around the year 1118, and owes its name to the Dome of the Rock, an islamic sanctuary located in the whereabouts of the Biblical Temple of Jerusalem; the Templars used to call this Dome "Templum Domini".

The Knights Templar are remembered for the economic and cultural development they brought throughout Europe and they are still cited today as a shining example of honesty, utter devotion, and faithfulnes.

Since the Knights were a military order, the metal trims of the pen were inspired by the iron and steel of their armour and have been duly aged.

The seal that accompanies the pen in its special box bears a significant historical weight too, it portrays two knights, a symbol of purity and of the dual role of the monk-soldier.