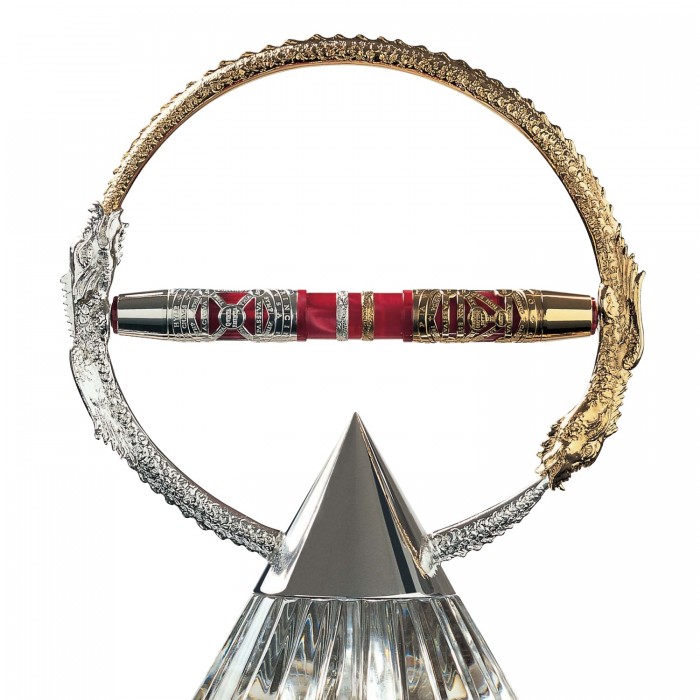 The Alchemy Vermeil is a very special writing instrument produced by Visconti in a limited edition of 1038 numbered fountain pens.

The focus of the fountain pen is the transformational nature of the art of Alchemy, as expressed by the duality realized here. Two nibs, hidden under two caps, drawing from two independed ink tanks. This is a marvelously engineered pen, that is at the same time decorated in a very artistic manner, covered with engravings inspired by the works of the Alchemists.

The barrel of the pen is made of an intense red vegetal resin, and is covered with metallic details in silver and gold coated silver. Both nibs are made of 18kt gold, and both ink reservoirs fill with an eye-dropper system.

The Alchemy limited edition fountain pen comes in a very special, intense red presentation box, along with a uniquely decorated inkwell that also serves as a pen stand. A large conical crystal serves as the inkwell and as the back of the pen stand. On the cap of the inkwell is attached a large circle formed by two dragons, each consuming the other's tail. Only the Alchemy fountain pen can stand between the dragons, attached magnetically at the heart of each one of them.