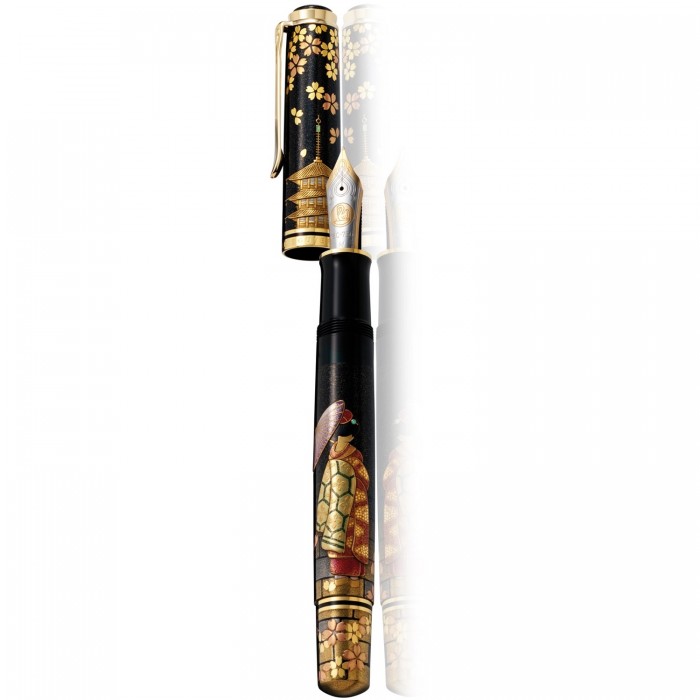 This distinctive and unique fountain pen was crafted and drawn using the Kaga-Togidashi-Taka-Maki-e technique that combines Taka-Maki-e and Togidashi-Maki-e.

Heiankyo was established in 794, when the Emperor Kammu declared the transfer of the capital of Japan to this new city, Kyoto. It was the place of gorgeous dynasty, where the common people also lead powerful lives. By the end of the 12th century, Kyoto had become the center of commerce and industry of Japan. After approximately 700 years of prosperity, Kyoto was reborn as a modern city, when the Meiji Emperor moved the capital to Tokyo. Present-day Kyoto is the sixth largest Japanese city, with a population of 1.5 million people.

With its long history, Kyoto has many temples and shrines, along with other historical architecture, and flourishes as the most popular Japanese tourist attraction.

A Maiko is a young apprentice Geiko who trains in arts and customer service manners. In the old days, girls started out as Maikos between the ages of 9 to 12, though the lower age limit has now been raised to after graduation from junior high school. Young and in the apprentice status, a Maiko wears a furisode, a long-sleeved kimono for unmarried women, adjusted at the shoulders and hemmed up. Due to the flashy outfit of lacquered clogs with rounded soles and dangling sash, a Maiko is now said to be the epitome of beauty for Japanese women.

The Pelikan Maki-e fountain pen "Maiko" depicts a graceful Maiko, standing on a stone pavement in falling cherry blossom petals with the historical five-stories pagoda of Kyoto in the background. It takes up the theme of Maiko, one of the symbols of the ancient capital of Kyoto.

The "Maiko in Kyoto" is a masterpiece that combines the craftsmanship of Pelikan Germany based on 170 years of tradition and technology coupled with superior Japanese traditional Maki-e painting techniques.

The Limited Edition “Maiko in Kyoto” is limited to 88 numbered fountain pens worldwide. Each fountain pen is equipped with an 18 carat, two-tone gold nib and is encased in a traditional Japanese pen box made of paulownia wood.