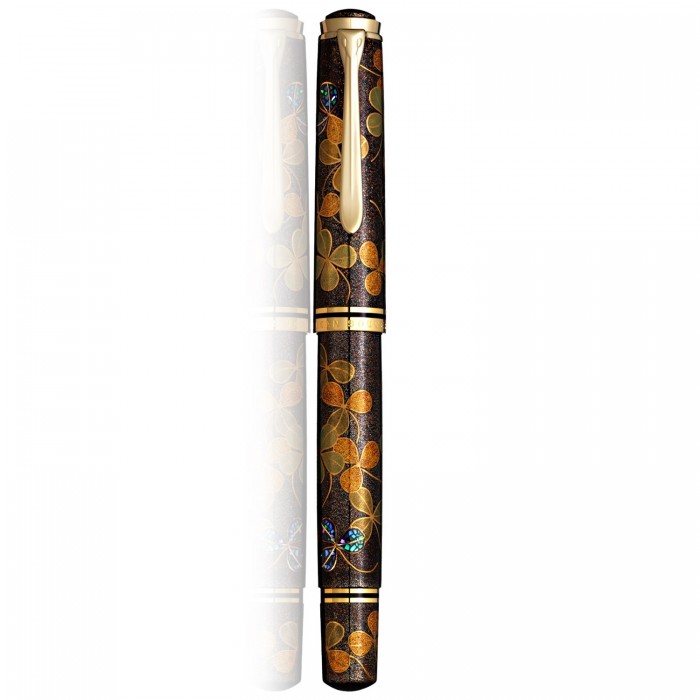 This distinctive and unique fountain pen was crafted and drawn using the Kaga-Togidashi-Maki-e technique.

The four-leaf clover is one of the most famous good luck charms. According to an ancient European legend, anyone finding a four-leaf clover will also find happiness since, being very rare it is considered to be a powerful talishman.

In a famous story, the life of Napoleon Bonaparte was saved when, on the field of battle, he stopped to pluck a four-leaf clover, and successfully dodged a bullet.

Each individual leaf of the four-leaf clover has a specific meaning: fame, wealth, faithful love, and glorious health and, combined, are believed to bring good luck. Additionally, the four parts of the clover indicate hope, happiness, heart and health as well as the compass points - east, west, south and north - with the four guardian spirits of direction unified into one central point. There is a million-to-one chance of finding a five-leaf-clover - the individual parts of which are thought to bring love, wealth, health, luck and success, as well as prosperity and fortune.

Pelikan's Maki-e fountain pen depicts one five-leaf clover and six four-leaf clovers together with many three-leaf clovers and employs mother-of-pearl and cut gold work amongst other techniques to vividly recreate this good luck charm.

The M1000 Maki-e Four-Leaf Clover is a masterpiece that combines the craftsmanship of Pelikan Germany based on over 170 years of tradition and technology coupled with superior Japanese traditional Maki-e painting techniques.

The M1000 Maki-e “Four-Leaf Clover”  fountain pen is limited to 88 numbered pieces worldwide. Each fountain pen is equipped with an 18 carat, two-tone gold nib and is encased in a traditional Japanese pen box made of paulownia wood.