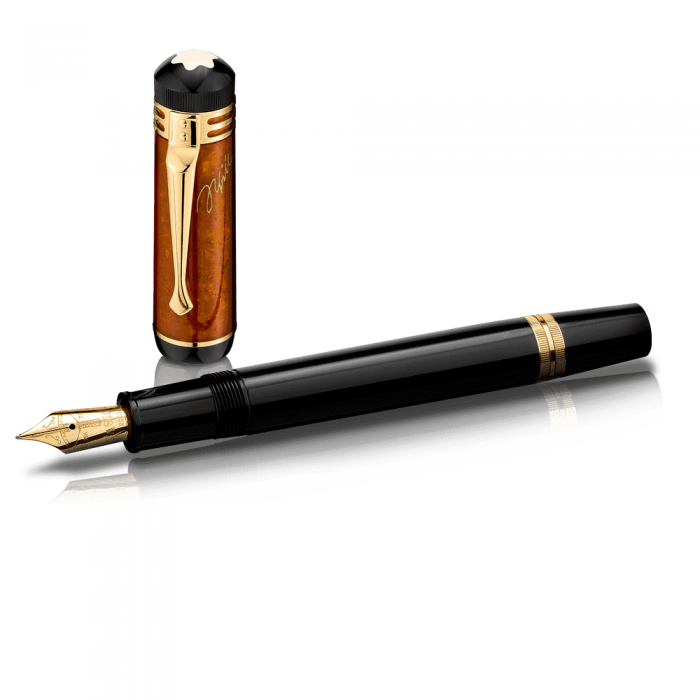 The Montblanc Writers Limited Edition for the year 2000 honors a master playwright and supporter of freedom, Friedrich Schiller.

Montblanc honors the legacy of an idealistic social critic.

Friedrich Schiller, the German playwright, is closely associated with the theme of freedom, which dominated the German drama of his time.

Schiller's preoccupation with the rebellion of the individual against social repression was shaped by his experience during his training at a military academy, and was always a central theme in his work.

A gifted poet, Schiller's distinctive sense of theatre gave rise to impressive dramas which captured the spirit of a century of revolution and radical social change in a way that few others have achieved before or since.

Plays like "The Robbers", "Mary Stuart", "Wallenstein" and "William Tell" captivate theatre-goers today just as much as they did in Schiller's own lifetime, when they made him a prominent supporter of the freedom to which his age aspired.

What could be more appropriate for this Limited Edition than to use amber, a substance prized by Schiller and his contemporaries as a symbol of everything that was new, and of the striving for social freedom.

This substance, which often contains prehistoric flora and fauna, was a source of fascination and inspiration to people in their quest to find new answers to old questions.

Superlative craftsmanship has given rise to exclusive writing instruments with a unique aesthetic appeal, whose simple elegance recalls the classical Weimar period.

The characteristic that most stands out is indeed the cap of the fountain pen, a large segment of which is made of amber. The barrel of the pen is made of precious black resin, while the final touches are added by gold coated metal trims.

This is a piston filling fountain pen that has an 18kt yellow gold nib with a dedicated engraving. The engraving includes the year of release, 2000, and a crossbow similar to the one used by William Tell.

The fountain pen listed here comes from our collection and is new unused, it comes with a full set of box and documents.