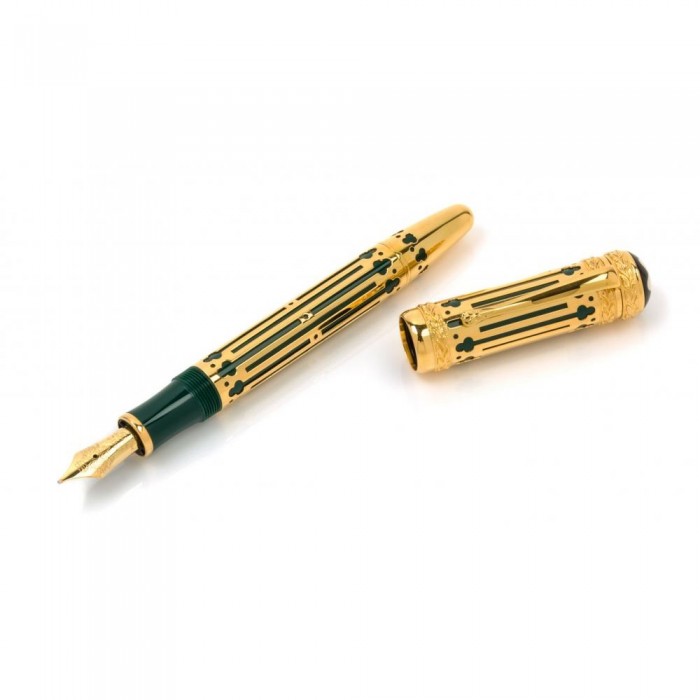 The splendidly ornamented Patron of Art Edition Peter the Great commemorates the life and work of one of the great monarchs of the czarist throne. This limited edition Montblanc 4810 pen features gold coated ornamentation with blossom wreath motifs over the jade-coloured barrel.

A dedicated 18-karat gold nib, into which the symbol of the Russian monarchy – the two-headed eagle – complements the pen.

Peter the Great, inspired by the emerging spirit of enlightenment, led his country from isolation into its development as a cultural center of Europe. Although he was more interested in economic and military sciences, his name is indelibly bound to the cultural awakening of Russia.

Peter initiated the first Russian newspaper, introduced a more easily understood alphabet, and founded both the first state museum with a public library and the Russian Academy of Science.

These amazing achievements were established in St. Petersburg, the city named after its patron and his great creative powers.

This Montblanc Patron of Art Peter the Great 4810 was introduced in 1997 in only 4810 numbered pieces.

The pen that we are offering here is sealed by the manufacturer and is in perfect condition. It comes in the luxurious giftbox Montblanc designed for this edition.

The Montblanc Patron of Art Catherine the Great 4810 with matching number is available, contact us to enquire about the purchase of the couple.