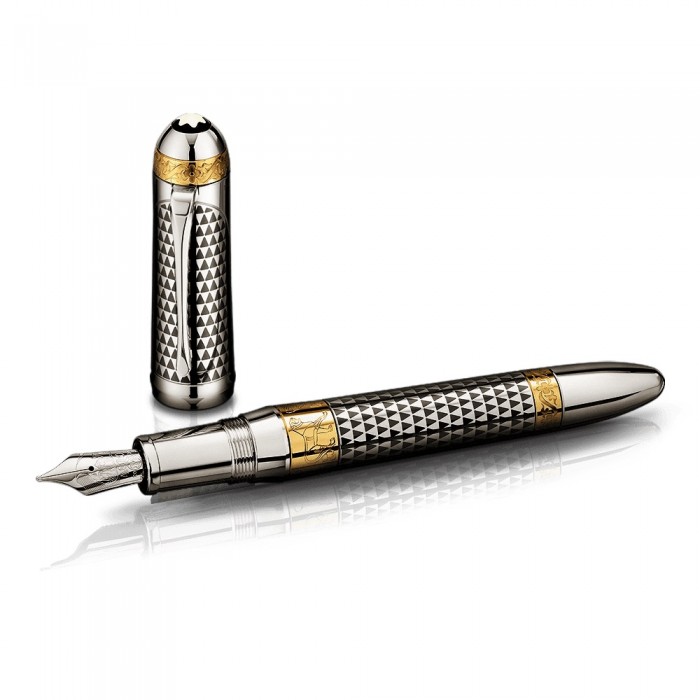 To this day, the oriental excavations of diplomat and archaeologist Max von Oppenheim make an invaluable contribution to the worlds of science, art, and culture.

In 1899, his boundless passion for research led him to discover remains of an advanced culture which had long been believed to have disappeared without trace.

His work at Tell Halaf, an ancient settlement mound in northern Syria, made him one of the most important archaeologists of the 20th century. Alongside numerous prehistoric finds were important stone statues and relief panels from the 9th century B.C.

In 1930, Max von Oppenheim put his treasures on public display in the Tell Halaf Museum which he founded in Berlin.

He also established a foundation for research into the East which still pays tribute today to a truly outstanding archaeologist and researcher.

The design of this fountain pen is inspired by the domes of Eastern mosques. Pale grey lacquer inlays on a barrel made of 925 sterling silver are reminiscent to the decoration and frescoes of the Middle East while the fountain pen's gold-plated rings recall the famous designs and reliefs from Tell Halaf.

The limited Edition Patron of Art Max von Oppenheim is crowned by the white Montblanc emblem and embellished with a finely engraved Bedouin motif on the rhodium-plated 18k gold nib.

This is an exclusive limited edition fountain pen of 4810 numbered pieces released in 2009.

The Montblanc Patron Max v Oppenheim 4810 fountain pen listed here is new from our stock and in perfect condition. The pen comes in the luxurious gift box provided by Montblanc for this limited edition.