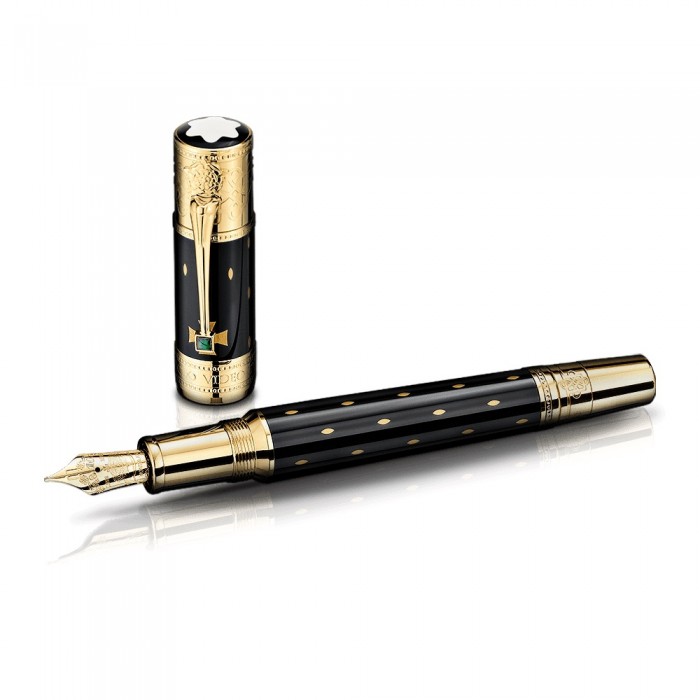 The Montblanc Patron of Art Edition of 2010 honors Queen Elizabeth I, the English monarch and lover of the arts.

Probably no other sovereign in English history made such a lasting impression as Queen Elizabeth I.

Still renowned today, her fame arose not only from her successes in foreign policy, which opened the way for Britain's future as a worldwide imperial power, but also from her love of culture and the arts.

Under her rule Britain blossomed as a truly cultural nation in which the English renaissance reached its zenith.

Famous masters, such as author and dramatist William Shakespeare and composer John Dowland, created the nation's cultural history during Elizabeth's monarchy, and her more than 40-year reign became known as the Elizabethan Age, a synonym for a magnificent period in Britain's history which still resonates today.

The unique aesthetic of this pen is inspired by the robes of Queen Elizabeth I and her imperial insignia. The barrel and cap of the fountain pen are finished in lustrous lacquer, while the metal fittings are gold coated. A synthetic gem adorns the clip.

The fine 18K gold nib of the fountain pen is adorned with fine engravings of a royal crown.

This is an exclusive limited edition fountain pen of 4810 numbered pieces released in 2010.

The Montblanc Patron Elizabeth I 4810 fountain pen listed here is sealed and in perfect condition. The pen comes sealed in the luxurious gift box provided by Montblanc for this limited edition.